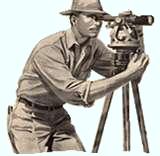 Land surveying is among the oldest professions on this planet. From the time that man has decided that a part of land should be owned by a tribe, the necessity of surveying began.

Land surveying is fascinating. The strategies used aim to decide which portion of land is owned by whom, hopefully ending arguments permanently.

The bottom line is, surveying is really a process using mathematical ways to survey land.

The very first accounts of surveying land dates back to ancient Egypt. Experts found evidences that the ancient Egyptians used basic geometry to redraw the lines of boundary when the Nile River overflowed. An Egyptian land register dating back to 3000 BC have also been found.

Following Egyptians, the Romans – also probably the most powerful civilizations belonging to the ancient world – practiced land surveying. They took it a stride further and made “land surveyor” a state position within the Empire.

These people were called agrimensores, also called Corpus Agrimensorum Romanorum. While they used simple tools, they were very thorough with their jobs and would create straight lines and proper angles while using these tools.

After the lines were measured, they’d create shallow ditches to mark the lines. Actually, a lot of the furrows they created still exist today.

Among the recorded land surveying in the “modern” times belongs to William the Conqueror who wrote the Domesday Book in 1086. This book serves as a directory of names of land owners, the amount of land they owned in addition to other information regarding the land.

Even though it was a fabulous amount of information during this time period, the pieces of information weren’t 100% correct. The locations just weren’t accurate and the maps had not been made to scale.

One among history’s greatest icons had also been an avid surveyor – Napoleon Bonaparte. The interest in surveying land was actually just a product of his wish to conquer the world. Napoleon Bonaparte founded a registry referred to as cadastre.

This includes a registry of properties of a county, ownership details, locations and as many details concerning the land’s value. Yes, Napoleon Bonaparte can be considered a land surveyor – plus a very smart man.

The strategy used for land surveying have also evolved over the centuries, over time. Once, people would use whatever may help them determine the distance from one place to another.

It indicates using chains with links and even ropes. Naturally, this didn’t give accurate results but they didn’t have the technology we now have in those days.

Today, land surveyors enjoy the best technologies in order to help with their job. There exists GPS, or Global Positioning System, which is one of the more accurate technologies used today.

Total stations are also very important to a land surveyor, which employs the use of an EDM or Electronic Distance Measurement device together with a theodolite which enables for further precise angle and distance measurements.